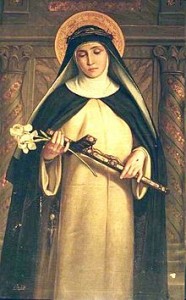 Catherine Benincasa, born in Siena, Italy in 1347 combined in her short life several strands which reveal a very strong and vibrant personality. At the age of 17, she joined a group of lay Dominicans who devoted themselves to prayer and work for the poor. Her contemplative prayer leading to action were the warp and weft of her life which gradually became involved in issues arising from the political turmoil of the time. Although without formal schooling, she worked unremittingly for the return of the Papacy from Avignon to Rome and her charism for promoting peace and unity is very evident in her letters to popes and kings. Her uncompromising stance for the truth, her loyalty to the Holy See combined with a zealous style leave no doubt that she was filled with the wisdom of God. Her legacy to us after her death at the age of thirty-three was validated by Pope John Paul 11 as recently as 1999 at the opening of the European Synod, when he declared her a Patroness of Europe.

Extracted from: In Search of Truth; The Dominican Way in Education

Directions
to our school